By joint ferry and bus service it takes 9 hours 30 minutes to travel from Koh Phangan to Hat Yai.

Joint ferry and bus services from Koh Phangan to Hat Yai depart from the ferry pier in Thong Sala. 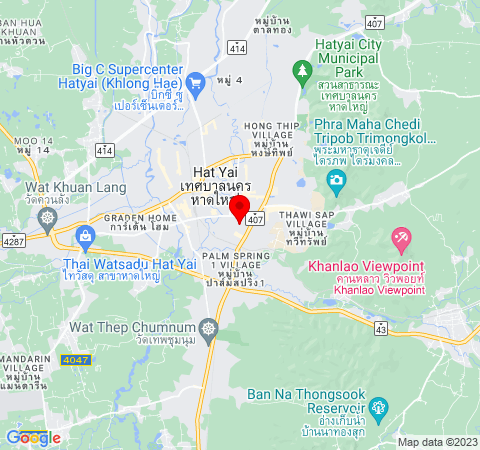 About travel to Hat Yai

For most people travelling on this route Hat Yai will not be their final destination. Hat Yai is a large city with lots of shops, hotels and restaurants, it is not, however, popular with most tourists except for mainly Malaysian and Singapore visitors taking short breaks in the city. The reason that most people travel from Koh Phangan to Hat Yai is because Hat Yai is a major transport hub for travel across Southern Thailand and into Malaysia.  For travel to Malaysia the nearest border crossing is in Padang Besar, and in the Malaysian part of Padang Besar there is a railway station where you can board services on Malaysia’s electrified West Coast Train Line. Minivans to Padang Besar depart from the bus station frequently and cost 50 THB per person all the way to the border. Minivan services to the border at Sadao (for Penang) and the border crossing in Sungai Kolok (for Kota Bharu) also depart from Hat Yai Bus Station.

Hat Yai is also a hub for services to Koh Lipe. Most of the joint bus and speed boat services from Hat Yai to Koh Lipe depart from near to Hat Yai Railway Station. Hat Yai Railway Station is 2.9 km by road from Hat Yai Bus Station. Motorbike taxis and taxi vans wait for passengers outside the front of Hat Yai Bus Station and the normal fare to Hat Yai Train Station is 50 THB person although this can vary from driver to driver. A closer destination, also with a beach and an interest Old Town area, is Songkhla. You can get to Songkhla from Hat Yai Bus Station in about 40 minutes in a minivan. The fare is 40 THB and the drop off point in Songkhla is the main bus station, which is about 45 minutes walking time to the south of Songkhla’s main tourist areas.