Several companies operate joint bus and ferry services which take passengers direct from Phuket to Koh Samui. The journey by bus and ferry takes 7 to 10 hours.

Joint bus and ferry services to Koh Samui depart from a variety of different locations in Phuket depending upon who you travel with including the island’s main public bus station, Phuket Bus Terminal 2.

Joint bus and ferry services from Phuket arrive into a number of different ferry piers on Koh Samui depending upon whom you travel with. The service provided by the Phantip travel company arrives into Koh samui at Nathon Ferry Pier 3. 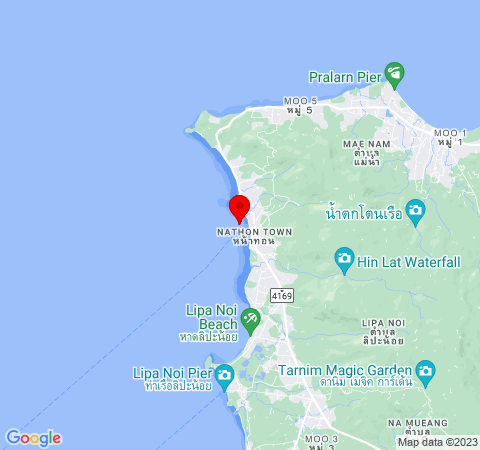 Wat Phra Yai, also known as Big Buddha temple, is one of the most distinctive landmarks in Koh Samui. If you arrive by plane into Koh Samui Airport or by ferry into Bangrak Seatran Ferry Pier the temple’s 12 metre high Buddha statue on a small hill will one of the first things you see as you near the island and it has formed lasting impression on many people over the years as they arrive in Koh Samui for the first time. It is also well worth going to the temple itself to see the statue up close as well as the views from the platform where the statue sits.

Wat Phra Yai is located on a small island, Koh Fan, which has been joined to the mainland by a man made cause way making it easy to access the temple. The statue itself was built in 1972 with the wheel behind the image of the Lord Buddha added in 2012. To reach the statue visitors need to ascend a long staircase which has a balustrade on each side shaped like the mythical Naga, which resembles a large serpent and according to legend comes to earth from a spiritual realm. It is free to enter the temple although donations are appreciated as they fund the maintenance of the site. Near the entrance to the temple there toilets, as well as lots of restaurants and souvenir shops. There are also lots of taxis which wait for passengers near the entrance to the temple.