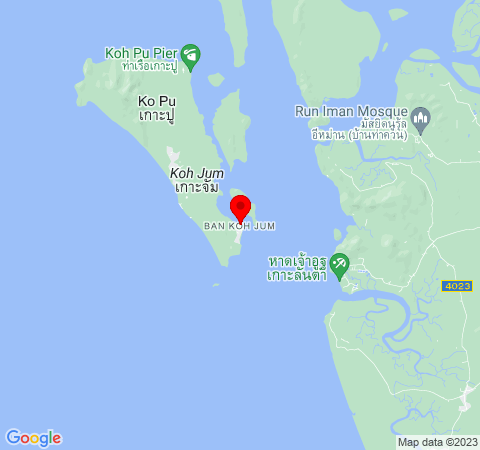 Koh Jum is an island on the west coast of Thailand (not far from the mainland) to the south of Krabi Town, the north of Koh Lanta and the east of Koh Phi Phi. Compared to these other three popular destinations, however, Koh Jum receives very few visitors and is only partially developed. There is accommodation on Koh Jum, and some great beaches, but it tends to be very basic. The island gets electric from the mainland but very few of the resorts on the coast are connected up to it. This means that at most of the island’s resorts there is only electric from around 18:00 to 06:00 at the latest, and at some resorts the electric generator gets turned off at midnight. A stay in Koh Jum is an experience of a beach holiday in Thailand similar to what it was like 20 years ago in the Thai beach resort areas which are now very popular.

Koh Jum is the name normally used to describe the whole island, which is 9.3 km long and 4 km at its widest point. This is incorrect as the northern part of the island is referred to locally as Koh Pu whilst only the southern part of the island is referred to as Koh Jum. Koh Pu is a lot more hilly and densely forested than Koh Jum, and it is Koh Jum that has the largest town and receives the majority of the visitors.