By joint bus and ferry the journey from Chumphon to Koh Phayam is scheduled to take between 4 hours and 10 hours 30 minutes depending upon which service you use.

Services from Chumphon to Koh Phayam depart from in front of Chumphon Railway Station. 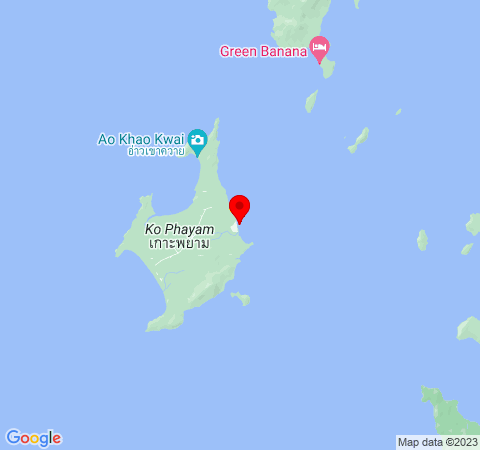 Koh Phayam is a small island on the west coast of Thailand, roughly 8 km long by 5 km at its widest point. Thailand has lots of islands, but this one is a bit unusual for a number of reasons. Firstly, the island’s infrastructure is a lot less developed than almost any other permanently inhabited island in Thailand. There are no cars on Koh Phayam because there are no roads suitable for them. The island also has no mains electric connection. Everything runs on solar power and generators. When you are considering on somewhere to stay on Koh Phayam bear in mind that at some of the cheaper places the electric goes off at night.

Secondly, Koh Phayam has a steady stream of visitors, a stream that is increasing, but nothing like the volumes of people that visit other Andaman Sea islands such as Koh Phi Phi or Koh Lipe It’s a long trek to get to Koh Phayam, except of course if you fly to Ranong, and that, combined with the lack of infrastructure puts a lot of tourists off from visiting. If a few hours on a bus and a ferry or speedboat doesn’t put you off, and you don’t mind an unreliable electrical supply and using a motorbike, then the small inconveniences that stop the majority of visitors in fact work in your favour by making the island peaceful. Other than these two differences, Koh Phayam is pretty much like a lot of other Thai islands used to be before Thailand started to get mass tourism. If you want lively nightlife and Western food, however, perhaps consider going somewhere else.