By bus it takes 5 hours 30 minutes to travel from Trang to Phuket. There are no rail, regular ferry services or air connections between Trang and Phuket so travel by road is the only option available.

Bus Timetable from Trang to Phuket 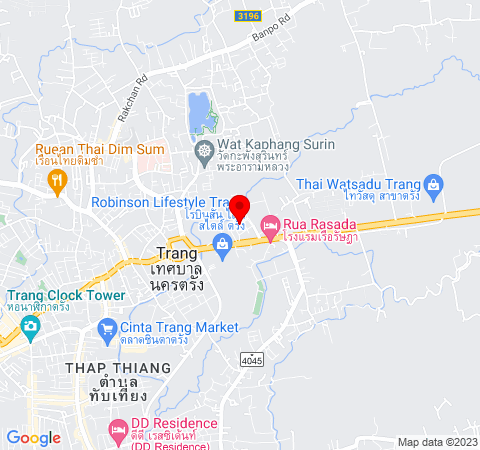 Wat Mongkol Nimit is a traditional Thai Buddhist temple located in Phuket Town, not far from the Old Town area around the the Thalang Road. Wat Mongkol Nimit was constructed in 1880 and is the principal temple in the town with a large numbers of resident monks. The main feature of this temple is its Central Thailand style shrine hall which has an elaborate three layer roof and intricate garuda designs in gold, red and blue on both gable ends. The temple is open to visitors every day from 08:00 to 17:30, at which times you can normally gain access to the inside of the shrine hall to see the large gold Buddha statue which is revered by the local Buddhist community.

The other major point of interest is the cluster of chedi in the grounds of Wat Mongkol Nimit. A chedi is a type of ornamental tower, usually containing holy relics, which is found in Buddhist countries all other Asia. Wat Mongkol Nimit has a central bell shaped chedi, which is Sri Lankan in style, surrounded by 8 smaller chedi which are covered in gold leaf. Unfortunately, the large Sino-Portuguese style wooden building where the monks live is off limit to visitors. This 100 year plus old building is a classic example of the style of building that was being constructed in Phuket Town at the end of the 19th Century and the start of the 20th Century when the island’s tin mining industry was flourishing.