By joint ferry and bus service the journey from Koh Tao to Bangkok is scheduled to take from 9 hours 45 minutes to 14 hours 00 minutes depending upon which service you take.

Joint ferry and bus services from Koh Tao to Bangkok depart from a ferry pier in Mae Haad. 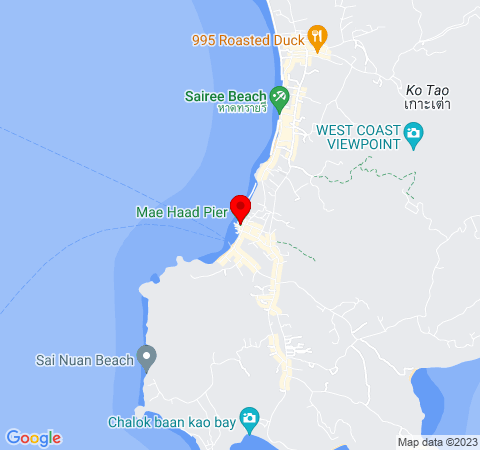 Direct ferry and bus services from Koh Tao to Bangkok arrive at locations near the Khao San Road in Bangkok.

Wat Chana Songkhram is a well known Buddhist temple on the Chakrabongse Road in Bangkok, opposite the western end of the Khao San Road. The exact date when Wat Chana Songkhram was founded is unknown, most likely some time in the 15th or 16 Century. The recorded history of the temple starts from the late 18th Century when the temple was renamed and renovated at the behest of King Rama I. The name Wat Chana Songkram means the Temple of Victory in War, so called to celebrate a series of battles fought from 1785 to 1787 in which Thai forces prevailed over invading armies from Burma. The temple was also dedicated as the temple of the Mon people (an ethnic group originating an area that is located modern day Myanmar) who fought as part of the Thai army against the Burmese. Mon monks were placed in charge of the temple by King Rama I.

The main building at Wat Chana Songkhram, the ordination hall, features a large shrine with several statues of the Lord Buddha and some very good large wall murals. The temple is a popular place of worship for Thai Buddhists. The commonly held belief is that praying at Wat Chana Songkhram will help people to overcome difficult problems in the same way that the Thai armed forces managed to win difficult battles against the Burmese, who at the time were the major regional super power.