The journey by bus from the Thai/Lao border to Udon Thani International Airport is scheduled to take 1 hour.

Click on the Nong Khai – Udonthani link in the timetable below for more information and to buy tickets.

Bus services to Udon Thani Airport depart from near to the exit of the Thai Immigration Post at the Thai Lao Friendship Bridge in Nong Khai.

The minivan service from the border crossing at Nong Khai takes passengers to the main entrance to Udon Thani International Airport. 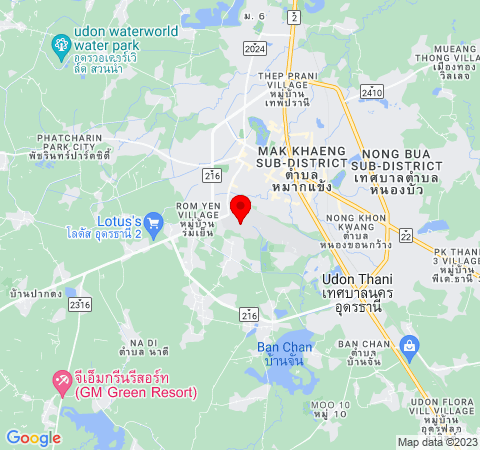 Ban Chiang National Museum is a major museum located 50 km east of Udon Thani city centre in the small town of Ban Chiang. The reason that the museum is so far from nearest large town is because of the major archaeological finds in and around Ban Chiang, which has been designated a UNESCO World Heritage site. The museum displays many of the artefacts dug out of the ground nearby. The artefacts are mostly 2,000 to 3,500 years old and evidence of a community living the area which was technologically advanced for the period during which they lived. The finds redefined our understanding of the history of human kind in South East Asia. Prior to the discoveries at Ban Chiang in the 1970s anthropologists believed that advanced technological methods were only came to South Asia hundreds of year later when large numbers of people emigrated from China to the region.

The most striking finds at Ban Chiang, and most interesting displays at the museum, are the pottery items. In particular the large jars, featuring colourful designs, are very impressive. Ban Chiang National Museum is open daily from 08:30 to 16:30, with an entrance fee of 150 THB charged to foreign visitors.