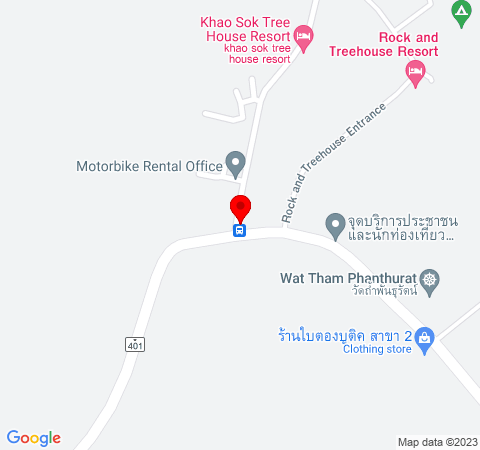 Khao Sok National Park covers an area of 739 square kilometres, of which 185 square kilometres is taken up by Cheow Lan Lake. Khao Sok National Park is bordered by 3 other national parks which together create a vast wilderness area of over 3,500 square kilometres. Most of Khao Sok National Park is only accessible by walking along narrow jungle footpaths, and about 60% of the park is taken up by hills of up to 960 metres above sea level. The area which is now a park was used as a base by communist insurgents precisely the dense jungle and hilly terrain made it easy for them to hide from the Thai military forces, and this inaccessibility allows a wide range of animals, birds, reptiles and plants to flourish. The park is believed to have 48 species of mammal and 311 species of bird. Amongst the rarer residents of the park are wild Asian elephants and even tigers, which are often heard but rarely seen by visitors.

The creation of Cheow Lan Lake in 1987, which was part of a hydro-electric generation project, really opened Khao Sok National Park up to tourists. Trekking, bird watching and interacting with elephants are all popular activities in Khao Sok National Park, but by far the most popular thing to do is to go for boat trips on Cheow Lan Lake which allow visitors to see a lot of the park without having to do any walking. Staying in floating bungalows on the lake, canoeing and fishing are also very popular.